Published on January 8, 2013, by admin in Uncategorized.

What do you do if confronted by an attacker with a weapon – in this case a knife or edged weapon?

If approached you should first ask yourself a few questions - by assessing your attacker when they approach you start to plan your response, ask yourself:

Escape                                  The priority (as always) is to try to escape – If you have the opportunity to run and escape during the course of a knife attack, do it immediately. Try to quickly scan your environment for possible escape routes - doors, windows, stairwells, or other avenues of safe escape. Under no circumstances should you engage in knife defence techniques unless it is absolutely necessary. Don’t let your ego or pride trap you into believing that it’s cowardly to run from a knife attack. Remember; If you attempt to outrun a knife attack, be certain that you have the athletic ability to really move.

Respect the Weapon         Even a child is dangerous with a knife so do not underestimate how big the problem is that you are confronted with, the odds are strongly stacked against your survival if you are unarmed and attacked by a predator with a knife. Bottom line - never underestimate the danger of a knife attack as it could cost you your life.

Attackers Intent                It’s critical to make an accurate threat assessment when confronted by a knife attacker. Use split second judgment to determine exactly what the attacker wants to accomplish – is he trying to rob you (using the knife as a threat) or does he want to harm/cut you (using the knife as an extra tool). If you have determined that your assailant plans to attack you with a knife, you must immediately resort to aggressive knife defensive tactics.

Control the Man              “…Control the man – control the weapon…”  A knife is a tool – it has no independent thoughts, actions, etc.  the weapon is controlled by the attacker and so it is the attacker who should be your focus.  By focusing solely on the knife you neglect the attackers other weapons – punches and kicks, etc.   Defensive techniques will neutralise the arm controlling the weapon while bearing in mind that the attacker still has other options to strike.  Initially you should look to create a gap between yourself and the weapon before making your move, from there you act decisively with simple and effective moves while keeping the blade away from cutting you. 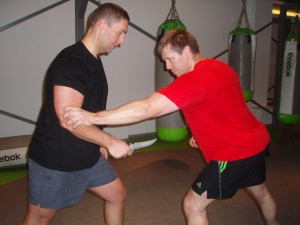 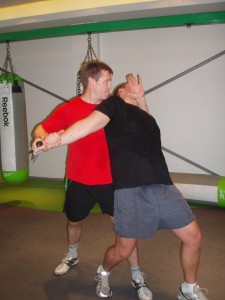