Published on January 22, 2013, by admin in Uncategorized.

If attacked you never want to end up on the ground with your attacker standing over you ready to harm, however, this is how many fights go if the attacker is not stopped quickly.  Many of us can be caught off guard or  may be wearing shoes (particularly ladies) which hinder our balance.  Amongst other restraints being on the ground slows your escape, limits your striking options and unless you are trained leaves you with a huge disadvantage.  There are a number of options open to the defender and if armed with the right skill set an effective defence can be deployed. 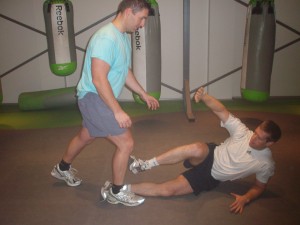 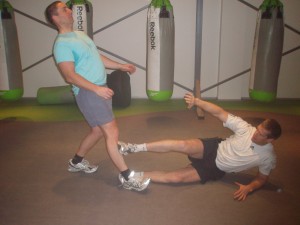 In the first 2 pictures above the attacker is approaching the defender while he is on the ground.  As the attacker moves to within striking distance (in most cases if he can strike you – you can strike him), there are a number of targets open to the defender.  In this case the lead (weight bearing) leg is open for a shin stomp/side kick.  By hooking the lower foot around the attackers heel (temporarily holding it in place for the following strike) and kicking the shin just below the knee it knocks the attacker back while causing a considerable amount of pain (obviously dampened if the attacker is not sober), if done with good technique the attacker will fall to the ground. 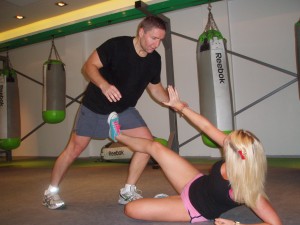 In the 3rd picture the attacker is again approaching (this time a female) from a standing position, in this case she has targeted the groin with a similar strike which will again cause considerable pain.  The same base is used to deliver the strike giving balance and helping accuracy.

The base position of the defender is very important, from this position he/she has good balance and can pivot from the hip if the attacker circles to change his line of attack.  The lower arm is supporting the defender (and helps when moving) while the other is used as a guard.  It is also very important that the defender can get up quickly from the ground into a good stance, this comes with practice and simulation of such situations.

Comments Off.
« Defence against a Knife Attack